We are witnessing a grand, inter-generational Ponzi scheme that’s destined to drown our children and grandchildren in red ink. Our leaders like to call their strategy borrowing, but it is really tantamount to stealing—from our children, worse yet. Why? Because we have no plans to pay the debt. The real irony is that while civilian leaders from both parties insist that our national debt is not an immediate problem, a military man, former chairman of the Joint Chiefs of Staff Admiral Mike Mullen, has made the point that the debt is actually a national security threat. In a speech to business executives in September 2011, Mullen declared, “I’ve said many times that I believe the single, biggest threat to our national security is our debt.”

The Beltway Beast continues to borrow just to make interest payments that are estimated to be $5 trillion over the next decade. All the while we are doing nothing to pay down the staggering U.S. debt that is projected to reach $25 trillion by 2020 according to the Federal Budget Outlook of 2013 and 2014. Add to that $1 trillion in student loans and the result is a significant amount of money taken out of the economy that could be invested in creating jobs at home. 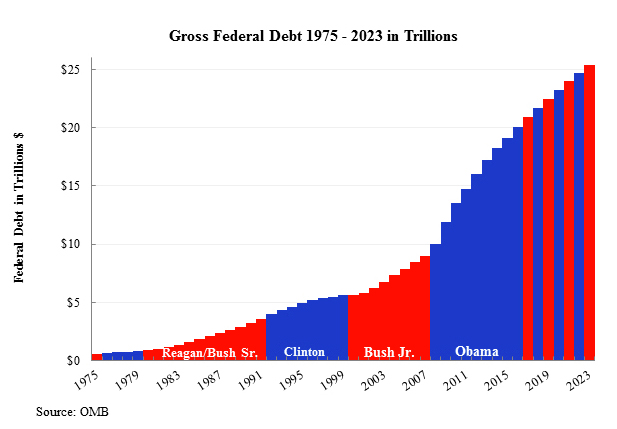 Equally alarming, perhaps even surreal, is that party leaders who can hardly agree on the color of the White House can be found nodding their approval at the fiscal fiction “that deficits don’t matter,” as then-Vice President Dick Cheney told a disbelieving Paul O’Neill, the treasury secretary in George W. Bush’s first term. That was over 10 years ago. Fast forward to President Obama, who told George Stephanopoulos in March 2013 that “we don’t have an immediate crisis in terms of debt. In fact, for the next 10 years, it’s [the deficit] gonna be in a sustainable place.” House Speaker John Boehner agrees that there is no immediate debt crisis. Neither one of them want to tell us who will pay the mounting U.S. debt.