Confessions of an Old Man – How Millennials are Being Robbed

Confessions of an Old Man – How Millennials are Being Robbed is about how the next generation’s future is being stolen and what can they do about it. The goal of the book is to get Millennials angry enough to actively engage with the American political system and take control of their destiny instead of their future being decided by rich old white men. It is a statement of collective guilt that places the responsibility on my generation, the baby boomers, for dealing a bad card to their children and grandchildren. My generation controls the Congress, the Supreme Court, and the presidency, so we cannot shirk from the responsibility.

This book describes an array of challenges young Americans face, brought about by the mix of government duplicity and inaction. It starts by defining the MI generation and characterizing its economic and political power in decades to come. It then provides an analysis of adverse impact of student loans, national debt, health-care cost, global warming, and retirement on future generations. The book concludes with a challenge and a road map of a better future for all Americans…more

“Exploring the ways that the baby boomer generation has robbed millennials of future economic stability, Moon uses in-depth research to quickly establish himself as an authority on the subject…. Anyone who is interested in learning a little more about economics, government, the environment, and the implications of the so-called “American Dream” is sure to enjoy Moon’s Confessions of an Old Man.”
San Francisco Book Review (4 stars)

I recommend this book to all who desire imminent change, but I deem it a must-read for Millenials. In his confession, this old man is guaranteed to convince the reader that serious issues can be conquered by working the democratic process–but the people must act.
Manhattan Book Review (5 stars)

“If you value your country and the future of our society, and would like our future to be better, then buy this book. If you know someone who wants to learn about new ways of thinking outside the box and tired of the same failed ideas being used over and over that is ruining it for the current (and future) generations, buy this book for that person….Each section gives valuable information, examples and interesting observations that affect everyone. Engaging narrative and well edited, I highly recommend this for anyone who wants a better country now and for its future generations.”
Indie Book Reviewers (5 stars)

“I recommend this book, “Confessions of an Old Man” to everyone who wants to read a clear, coherent vision of a better future for our country. Mr. Moon does a splendid job of stating his thesis in the beginning and backing it up with clear, coherent arguments throughout the whole book. Highly recommend.”
Sherrie Warner – Barnes & Noble Reviewer (5 stars)

“Munir Moon has a great ability to take complex ideas, concepts and put them in the simplest terms for all to understand easily and in a way that we can relate to, no matter if you are a Millennial, or a Baby Boomer, or a Gen X-er….a well-rounded approach to critical thinking and improving the conditions and can improve lives for future generations.”
Stefan Beacher – Goodreads Reviewer (5 stars)

“It is inspiring and well-researched – it is clear that the author knows what he’s writing about…Any book that presents solid ideas in a fresh way is worth a read, and I thought it was very eye-opening and inspiring as well.”
Nicole Hastings – Indie Book Reviewers (4-5 stars)

“I feel like Munir Moon did a wonderful job of getting his message out and doing so in a very digestible manner. I was unaware of so many things discussed in this book, and I consider myself to be fairly well educated and in touch with current affairs….Recommend for readers of economic and political nonfiction.”
Essiea Harmon – Goodreads; Barnes & Noble; Indie Book Reviewers (4-5 stars)

“Well-researched and intelligently written, this book is a tool for reflection that everyone with a good conscience should read, a book for those who love the children of America. This book should be perceived as a wake-up call to right the wrongs the generation before this one and the present generation are doing to the future of millennials. It’s a very realistic, prophetic statement about what we’ll leave to those who will come after us.”
Divine Zape – Readers’ Favorite (5 stars)

Other Books by Munir Moon 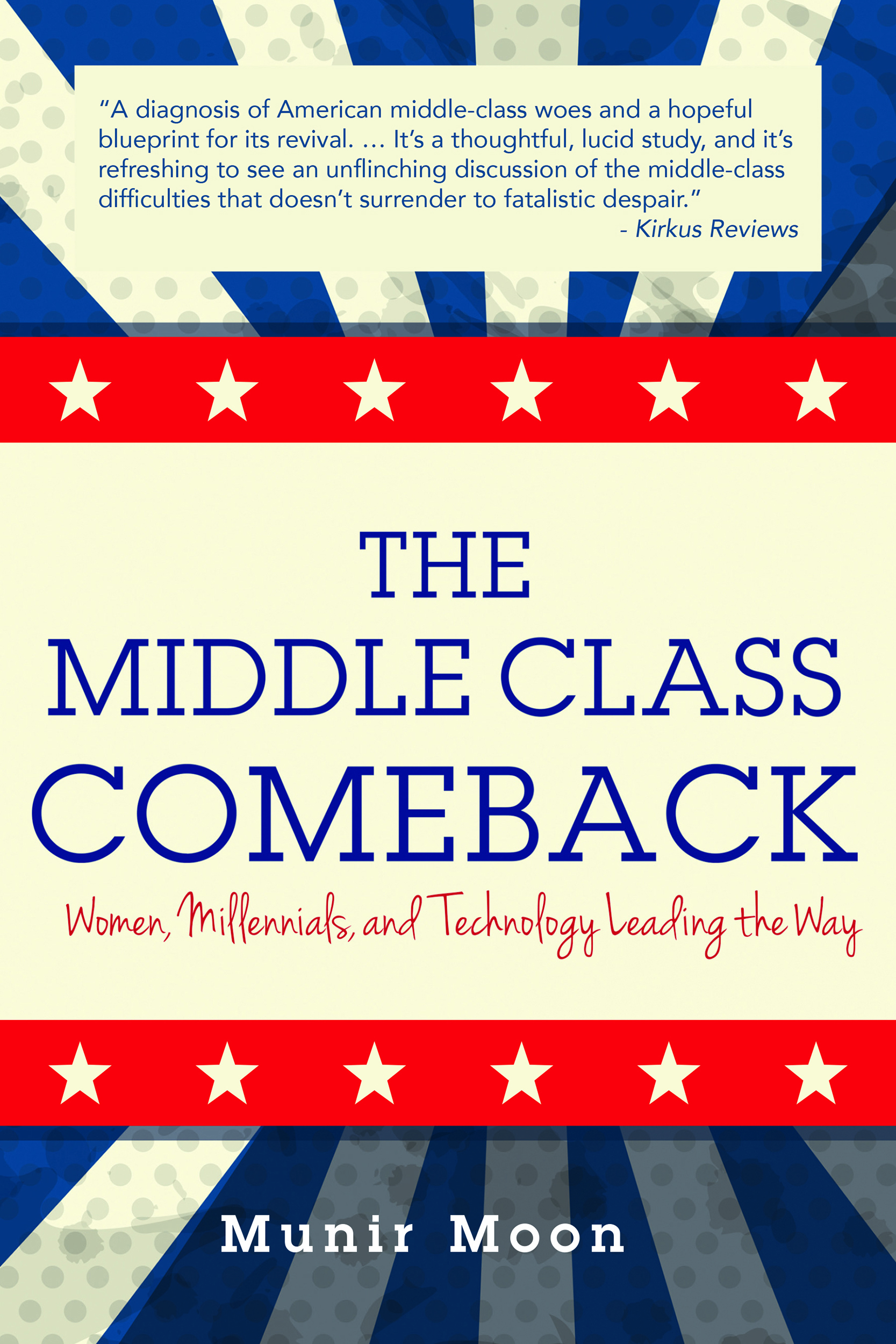 “A diagnosis of American middle-class woes and a hopeful blueprint for its revival. … It’s a thoughtful, lucid study, and it’s refreshing to see an unflinching discussion of the middle-class difficulties that doesn’t surrender to fatalistic despair. … As a brief primer on the state of the middle class, this is a valuable contribution to public debate. … A sensible, bipartisan analysis of the future of a major segment of American society.”  – Kirkus Reviews 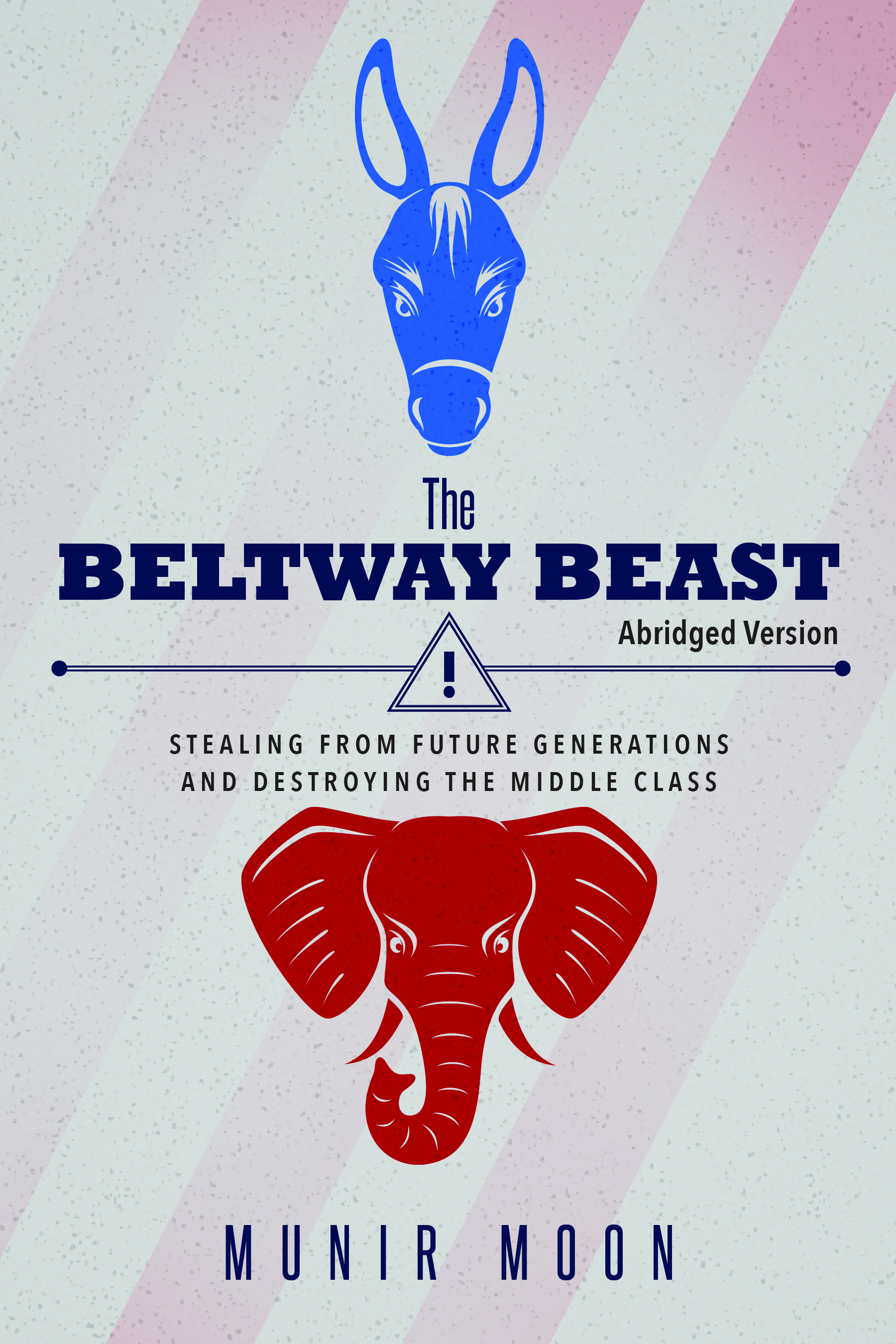 “He marshals impressive statistical evidence in favor of his thesis that government aggrandizement has come at the expense of voter power. …he offers a measured,serious diagnosis of today’s political difficulties, coupled with a wealth of provocative potential solutions. …An engaging critique that sees the two-party system as the source of the United States’ political travails.” – Kirkus Reviews
Share Tweet Follow Email Follow